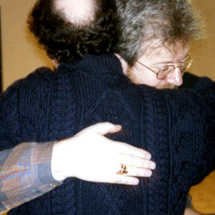 In the late 1990s at Ionad Cois Locha, in Dunlewey, Co. Donegal, Dáithí and his old pal, Mícheál Ó Domhnaill, exchange a hug backstage, while Maighread and Tríona look on, after the first Skara Brae concert in more than 25 years.

Skara Brae returned to the Ionad for another reunion, during the 2004/2005 Scoil Gheimhridh Frankie Kennedy.  That reunion was filmed for a TG4 documentary.  Here’s a clip: