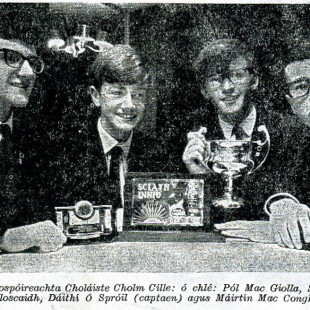 Since the early days of attending Irish College at Rann Na Feirste, and winning national championships with the St. Columb’s Irish Language Debating Team, Dáithí has been an avid Irish language speaker and scholar.  He earned an MA in Early and Medieval Irish, and worked as an editor for an Irish language publisher.  His scholarship has been published in Comhar and Ériu, including ground-breaking work on alliteration and rhyming patterns in old Irish poetry.   His collection of  short stories in Irish was published In 1987.

Dáithí continues to be actively involved with the language, teaching and performing songs in Irish, appearing on Irish language radio and television, and teaching beginner through advanced Irish language classes and tutorials.